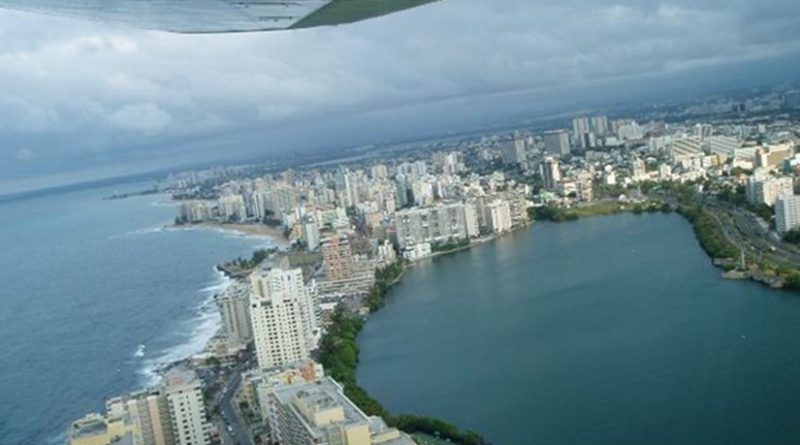 A smaller share of total income goes to hired labor in Puerto Rico than in any state in the U.S. In Puerto Rico, hired workers take home 25 cents of every dollar in net private-sector income, the rest going to investors, proprietors, and the self-employed.[1]

In the U.S. as a whole, employees earn 56 percent of private income. (There are more precise ways to calculate labor’s full share of income in the U.S., but this paper uses a method that matches U.S. and Puerto Rico data.[2]) Even in sparsely populated, resource-rich states such as Wyoming and Alaska, hired labor’s share is 40 percent or more.[3]

The primary reason for Puerto Rico’s extremely low labor share is its specialization in pharmaceutical manufacturing, an industry that uses vanishingly little labor in its productive process.

The Economic Census of Island Areas records that Puerto Rico shipped $77 billion of manufactured goods in 2012. Of those, $51 billion worth were “pharmaceuticals and medicines,” and another $9 billion were “medical equipment and supplies.”[4]

Hired labor’s share of income is not puny because manufacturing workers are poorly paid—the average compensation was 39 percent higher in manufacturing than elsewhere—but because Puerto Rican factories use so few workers in the productive process. In 2013, just 95,000 out of a workforce of 1,030,000 were employed in manufacturing.[5]

Puerto Rico ended up with such an extreme industrial concentration thanks to two federal laws. Section 936, a tax provision, offered subsidiaries of U.S. corporations very favorable corporate tax treatment if they located in territories.[6] But the maritime Jones Act, which is still in effect, granted a shipping monopoly to a handful of shippers, who use their power over consumers to raise prices much higher than competitive levels.

The two laws attracted an industry that produces high-value goods that are very small and light: pills. The labor-intensive aspects of the pharmaceutical industry, such as research and marketing, remained on the mainland. Puerto Rico received billions in investments for the factories that stamp out billions of pills that Americans rely on for daily health. Pills are small and light enough that the costs added by the Jones Act were outweighed by the tax benefits.

Most other manufacturers found that the costs of the Jones Act, Puerto Rico’s unresponsive government, expensive electricity, and rigid labor laws outweighed the tax benefit. These manufacturers stayed away.

Since Section 936 lapsed in 2006, Puerto Rico’s pharmaceutical sector has stalled, shedding 36 percent of its workforce.[7]

Puerto Rico has strict regulations on labor that are intended to benefit workers. The minimum wage in Puerto Rico is closer to the median wage than in any U.S. state, and Puerto Rico has European-style laws that make it difficult to fire workers. In spite (or perhaps because) of these laws, Puerto Rican employees earn a smaller share than their mainland counterparts.

At the same time, investors, proprietors, and workers are splitting a smaller pie: Puerto Rico’s economy has failed to converge to mainland levels of productivity and income. Strict labor laws failed to distort the distribution of income in the intended direction. Investment incentives plus strict labor laws only attract factories that use very little labor. Moreover, strict labor laws restrict growth and lower productivity, shrinking the pie and making everyone poorer.

Puerto Rico’s experience is a reminder that government does a terrible job at directing economic development. If Congress had pursued economic freedom for Puerto Rico throughout the 20th century, the island’s economy would have developed sustainable patterns of production and trade that reflect its true comparative advantages.

In response to Puerto Rico’s current fiscal crisis, Congress has received a variety of poorly conceived proposals intended to siphon federal money to Puerto Rico or to shield the island’s failed public utilities from reforms. No bailout, however, can address the underlying policy failures that have kept Puerto Rico from growing.

About the author:
*Salim Furth, PhD, is Research Fellow in Macroeconomics in the Center for Data Analysis, of the Institute for Economic Freedom and Opportunity, at The Heritage Foundation. The author thanks Astrid Gonzalez for research assistance.

Notes:
[1] Unless otherwise noted, figures are for 2013. Earlier data, such as for 2005, is substantially similar. Government Development Bank for Puerto Rico, Statistical Appendix of the Economic Report for the Governor and Legislative Assembly, “Table 11: Functional Distribution of Net National Income by Major Industrial Sector,” http://www.bgfpr.com/economy/statistical-appendix.html (accessed December 17, 2015).

[8] The lowest two are Delaware and South Dakota.

Decarbonizing U.S. electricity production will require both construction of renewable energy sources and retirement of power plants now operated by