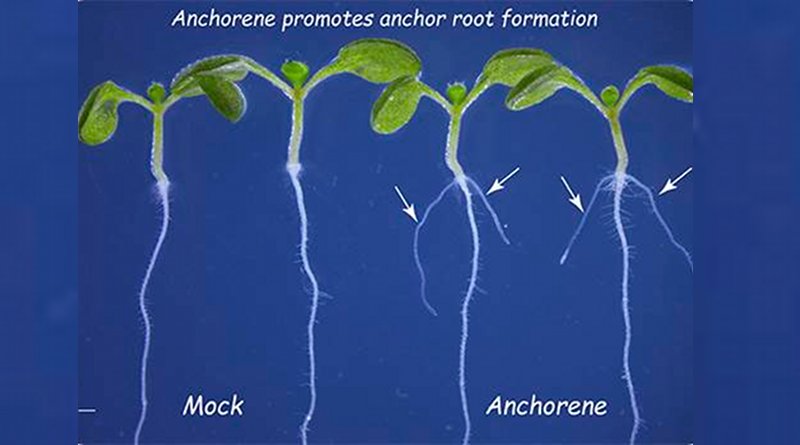 A metabolite in plants that regulates the growth of anchor roots—vital for sustaining water and nutrient uptake in plants—has been identified and may have useful applications in agriculture.

Pigment compounds called carotenoids are found in all plants and play a key role in successful photosynthesis and the generation of plant hormones and metabolites. These products are formed when enzyme activity causes carotenoid molecules to split—a process known as cleavage. While many carotenoid products are known to play key biological roles, less is known about one group of cleavage molecules called di-apocarotenoids.

“Di-apocarotenoids have rarely been characterized due to their instability and low abundance,” says KAUST research scientist Kunpeng Jia, who worked on the project under the supervision of KAUST’s Salim Al-Babili. “Indeed, we are only beginning to understand what their biological significance might be and what functions they have.”

The KAUST researchers, in collaboration with scientists in the United States and Germany, conducted an extensive study on the presence and biological activities of di-apocarotenoids inArabidopsisplants using developmental studies and state-of-the-art analytical chemistry techniques. Working with such inherently unstable compounds that have low molecular weights within plant tissues was a real challenge for Jianing Mi, from Al-Babili’s team, who honed lab techniques to extract and analyze the molecules without damaging them.

“We identified the di-apocarotenoid anchorene as a metabolite that sends a specific signal to trigger the formation ofArabidopsisanchor roots,” says Jia. “Because anchorene is a carotenoid product, correct carotenoid biosynthesis is also required for healthy root formation. We confirmed this using chemical inhibitors andArabidopsismutants.”

Further experiments showed that anchorene modulates the distribution of the plant hormone auxin in the anchor root formation site, which stimulates growth. Jia and coworkers found that increasing anchorene levels in carotenoid-deficient plants rescued anchor root growth, while promoting growth in normal seedlings. When they modified anchorene’s structure, it resulted in loss of activity.

“We’d like to explore the biological importance of anchorene further, and we also hope to understand exactly how plants produce this metabolite,” says Jia. “We will also examine the biological activity of anchorene in crop plants because our findings may be relevant in boosting yields.”

How To Get More Electric Cars On The Road