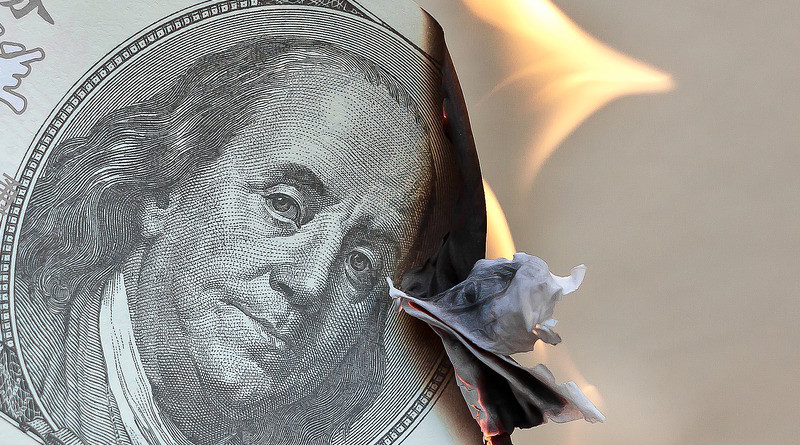 Until disco came back to me at dance clubs and via the great “boogie nights” in the 1990s, I didn’t recall a whole lot from my childhood in the 1970s. Trying to build my own “Speed Racer” and being in awe of the rock group KISS stand out.

“Too many dollars chasing too few goods” was another. That was the catchphrase used to describe the inflationary times, and it would be the last time monetary issues/policy would make sense to me for many, many years.

Why We Use Money

It’s not my favorite topic to deal with in class. Explaining money on the other hand, is pretty straightforward.

Technically, we don’t need it to survive. We simply need to be able to produce a good or service of some value to others. Since trying to translate that into terms of what another person produces (bartering) tends to gum up the gears of commerce, we have money.

At various points in time, salt has been used as currency, as has tobacco. George Washington wrote about using wampum. Whatever is in steady supply at the time, and holds an agreed-upon value can be used as money. For much of our history, it was gold.

Rather than having to produce all that is necessary to survive, money allows us to specialize in just one or two tasks. We can then trade with others to get what we need, or possibly want.

But politicians aren’t content unless they’re manipulating the value of money to political ends.

Some, including President Trump, for example, are smitten with the notion of a weak dollar due to the supposed trade benefits it confers. The weakening trend since he took office (or really since his candidacy started gaining steam in 2016), and particularly over the last couple of years, is no surprise given his administration’s rhetoric and moves to raise trade barriers.

The theory goes that a devalued dollar increases exports by making them cheaper than foreign goods in international markets. There is truth to that, but there are also drawbacks.

First, workers will be paid in dollars that are worth less, offsetting gains possibly realized by exporting industries. Second, other countries could very well view this as currency manipulation with the aim of gaining such a trade advantage and therefore move to weaken their own currencies in response.

Perhaps just as important, though, is the message it sends about how officials view their country’s past, its future, and its people.

When a government intervenes in the market to give its domestic industries a leg up, it is focusing on what is/has been. At best, it is attempting to forcibly solidify their position in the world. At worst, its efforts aid ailing companies.

All this demonstrates a lack of faith in the capacity of people in existing American industries to compete, in the ability of displaced workers to adjust, and an obliviousness to the fact that we’re kneecapping the ability of American innovators to access capital to push forward into new frontiers.

This tendency toward protectionism has shades of countries that go full-bore into state control. Rather than allow their people to flourish unimpeded, for example, the former Soviet Union and Venezuela cannibalized what they had in order to maintain state control up to that point in their respective histories.

Some Lingering Support for a Strong Dollar?

It’s ironic then, that President Trump has nominated for positions at the Federal Reserve candidates who have spoken favorably about the gold standard, and by extension a strong dollar regime. It seems to work against his desire, and frankly that of most politicians, to manipulate markets.

Make no mistake. When those politicians oppose the nominations of those who are less than enthusiastic about a weak dollar, it’s nothing more than masking a fear of giving up control. Politicians also see an opportunity to ride to the “rescue” when inflation-induced bubbles burst, and that opportunity is too valuable to give up.

And it’s only going to get worse the more power easy money advocates, like modern monetary theorists (MMT), gain. The printing press will go into overdrive and the dollar will further fall in value.

The seeming permanence of these errors is why I look forward to the start of every school year and the opportunity to implore students to “keep it simple” when considering what we learn, or just in general. One of the first things I tell them is that I’m merely putting flesh on the bones of things they already know.

For example, they know a night out with their friends is the (opportunity) cost of instead choosing to hang out with their families. They know that the ultimate decision on how many chicken strips they’ll eat depends on when they’re satisfied, their diminishing marginal utility.

Even my daughters know that me cutting those strips in half wouldn’t mean the total quantity of food has doubled, yet that’s exactly how policymakers will try to snooker them as adults by manipulating our fiat currency.

*About the author: Christopher E. Baecker manages fixed assets at Pioneer Energy Services, teaches economics at Northwest Vista College, is a board member of the Institute of Objective Policy Assessment, and is a member of the San Antonio Business & Economics Society. He can be reached via email or Facebook.