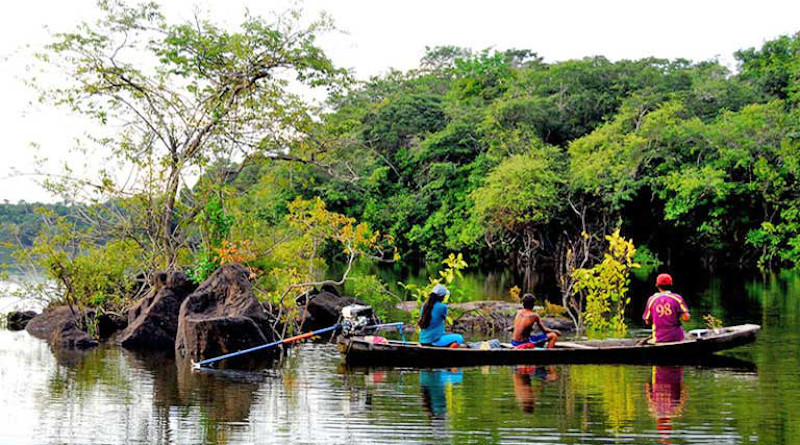 For many indigenous people, it takes more than 24 hours in a motorized canoe to reach the nearest major community, public officials and law enforcement. Such remoteness gives them little hope of seeking protection or avoiding conflict once outsiders move in aggressively to occupy indigenous ancestral lands. Image by Mauricio Torres / Mongabay.

By Mauricio Torres and Sue Branford*

With Brazil’s attention focused on the Coronavirus soaring case load and death toll, the Jair Bolsonaro government has introduced major modifications to the country’s indigenous land policy. Announced as a big step forward, the new rules will greatly facilitate the takeover of unregistered ancestral indigenous lands by landgrabbers, permitting use by loggers, cattle ranchers, soy growers, and other outsiders.

The measure opens up 9.8 million hectares (37,830 square miles) of land to these and other economic activities — land still not recognized as indigenous, as required by Brazil’s 1988 Constitution. Critics fear these wide-ranging land use changes will devastate the lives of thousands of indigenous people and result in significant deforestation that will push the Amazon forest toward an irreversible climate change tipping point, converting a large portion of it to degraded savanna and releasing massive amounts of climate-destabilizing greenhouse gases.

Indigenous land rights have been under constant attack by the government since Bolsonaro took office in January 2019. Even before he took over, the presidential campaigner hinted that he would grab back land from the Indians.

Recently, Fantástico, a hugely popular Sunday TV program aired in Brazil by TV Globo, showed footage of IBAMA environmental agency officials burning equipment used in illegal deforesting activities. In the video, one landgrabber, invading the Trincheira-Bacajá Indigenous Reserve in Pará state, said he’d been encouraged “by this talk from the federal government, from the Minister, that he’ll be lopping off 5% of indigenous land.” And he confessed: “We’re hoping, we’re expecting, this to happen one day and for the government to legalize our presence here,” occupying indigenous lands.

Now, moving more quickly than many analysts expected, the government has prepared the ground for rapidly legalizing such invasions, which are currently occurring across the Brazilian Amazon. On 22 April, FUNAI, Brazil’s indigenous agency, published Instrução Normativa (IN) nº 9/2020, which turns much of the country’s existing indigenous policy upside down by changing the way FUNAI’s “Declaration of the Recognition of Limits” operates.

This declaration provides would-be rural property owners with a certificate guaranteeing that the area they claim doesn’t impinge on indigenous land. Previously, such a certificate was not issued if the land claimed included indigenous territory — no matter whether or not the long bureaucratic process of officially recognizing an ancestral indigenous claim had been completed.

Now the certificates will be issued for land claimed, even if the area is in the process of being recognized as indigenous. According to FUNAI’s own figures, there are 237 indigenous areas, covering 9.8 million hectares (37,830 square miles), where the onerous registration and demarcation procedures have yet to be finished (see map). This means that, under the new policy, an area larger than the U.S. state of Indiana — much of it still covered in rainforest — has become available to landgrabbers and other outsiders.

According to a technical note issued by the Association of FUNAI Employees (INA), this new instruction means that “invaders of indigenous land can [now] ask for this certificate from FUNAI and, brandishing this document, they can then request from INCRA, [the federal government’s land agency], the legalization of the areas they have invaded, using the Institute’s [newly revised] system by which they, the landowners [themselves], determine the boundaries of their land.” Critics believe that the policy represents a watertight legal scheme for massive land fraud on indigenous lands.

The new policy has provoked outrage, with at least 49 MPF independent federal prosecutors from 23 Brazilian states united in protest. The MPF issued a Recommendation to the FUNAI presidency saying that the instruction should be immediately cancelled. According to the MPF, the decree violates article 230 of the Constitution, which specifically prohibits private property claims being prioritized over indigenous land claims, even if the official process for recognizing ancestral land is not complete. The instruction, the prosecutors say, increases “greatly the risks of land conflict and of social and environmental harm.”

The new instruction works hand-in-glove with what many see as a deliberate decision by the Bolsonaro government to freeze the process of indigenous land recognition. The administration hasn’t so far signed off on a single indigenous territory, even though it has inherited dozens of completed cases, as seen, for example, with the Tupinambá people in Bahia state.

MPF Prosecutor Yuri Corrêa da Luz, told El Pais that all kinds of bureaucratic delays are being generated by the administration to freeze indigenous land recognition. “What we seem to be witnessing is a structured policy [for delay] and not something resulting from possible irregularities in two or three cases,” Corrêa da Luz said.

The consequences for Brazil’s isolated indigenous groups, who have chosen not to be contacted by outsiders, may well be catastrophic. FUNAI forbids entry onto land where these Indians are known to live, but it has also not gone through the process of demarcating a reserve in these locales, which would in itself be disruptive and risk contact. Now, according to the technical note, “occupiers, squatters and landgrabbers will be able to obtain licenses to carry out economic activities, such as logging, in areas where outsiders are banned because they are inhabited by isolated Indians.”

The instruction was drawn up jointly by Marcelo Xavier, the current president of FUNAI (appointed by Bolsonaro and notorious for his anti-indigenous positions), and by Nabhan Garcia, head of the Land Affairs Department in the Agriculture Ministry (who is linked to Brazil’s controversial militias, according to reports in the The Intercept and De Olho nos Ruralistas, a website that monitors Brazil’s powerful ruralist sector). General Franklimberg Ribeiro de Freitas, who was FUNAI president before Marcelo Xavier, referred to Nabhan Garcia as someone who “salivates hate of the Indians.”

In a video published on the FUNAI website, Xavier says the new instruction “brings judicial security [and] reduces land conflicts.” He claims that it serves indigenous interests as it respects the country’s Constitution.

Brenda Brito, a researcher at IMAZON, a not-for-profit organization widely recognized for its work analysing Amazon forest trends, doesn’t agree. She told Mongabay that the new policy will “create legal insecurity, including for those areas that really do lie outside indigenous land.” She explained this paradox by noting that the new instruction will make it impossible to distinguish between a property that overlaps indigenous land and one that doesn’t.

“How will a buyer know whether a property, is or is not, superimposed on an indigenous reserve that is in the process of being demarcated [having its boundaries marked out],” she asked. Clearly, such ambiguity means that even a buyer who wants to act legally may end up purchasing indigenous land and having problems in the future.

Brito is fearful of the consequences: “The new instruction may lead to a wave of invasions of indigenous land, as is always the case when a piece of legislation creates the expectation that landowners may be given rights to land that should be used in a very different way.” The possibility for conflicts and violence will likely be heightened, at a time when IBAMA and FUNAI, the main federal agencies dealing with these questions, have been greatly weakened by the Bolsonaro government.

The new policy also increases the extreme vulnerability of indigenous peoples to the coronavirus pandemic. A recent study by the Brazilian Association of Population Studies (ABEP), found that it is far easier for outsiders to enter non-demarcated territories than demarcated ones, and thus more difficult to isolate the communities within.

The Socioenvironmental Institute (ISA), a Brazilian NGO, fears that the pandemic is only now beginning to reach indigenous communities; 105 indigenous cases have been confirmed in indigenous villages in the country, with six deaths confirmed so far, all in Amazônia, the region least well medically equipped to treat severely ill patients.

This being so, experts say, the indigenous right to land, and the right to life, have become inextricably intertwined. According to anthropologist Daniela Alarcon, “just at the moment when we are seeing COVID-19 advance on the indigenous peoples, and the communities are making tremendous efforts to protect themselves, the [FUNAI] measures adopted by the government may well have a very serious impact in the opposite direction, not only with respect to their land rights, but also in paving the way for the occurrence of genocide.”

According to indigenous activists, the new FUNAI rules, the sharp uptick in land invasions and forest fires, increased health vulnerability, and heightened threats of violence, all have a common source. These threats, they say, will only be curbed when Bolsonaro is thrown from office, either through impeachment or election.

Prevented by the pandemic from holding their annual Free Land Camp in Brasilia — a national assembly bringing together indigenous peoples from all over Brazil — leaders held a virtual meeting from 27-30 April. In their final document, they wrote that the nation’s 900,000 indigenous people are under attack from the worst virus in their history: the Bolsonaro government. The leaders concluded their meeting with a resolute message: “We will resist forever, with the wisdom we receive from our ancestors, and in the name of present and future generations.”

*Source: This article was published by Mongabay