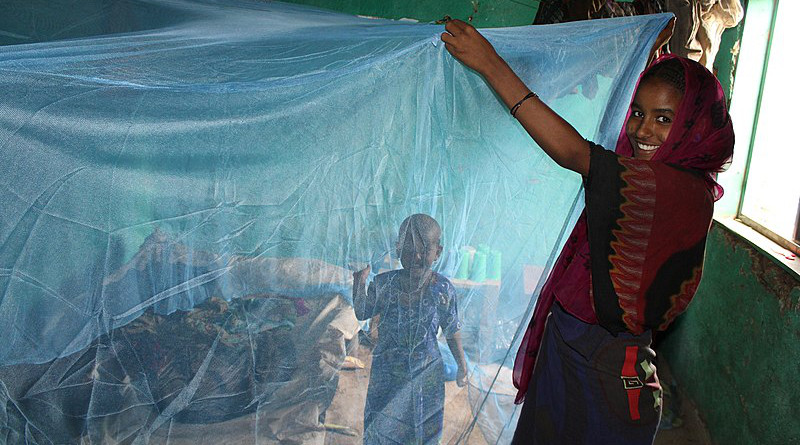 A fungus that lives in malaria-carrying mosquitoes could boost global efforts to control the disease, which kills about half a million people — mostly children under five — every year.

Scientists have discovered a microbe, a fungus they have named Microsporidia MB, in Anopheles arabiensis mosquitoes around the shores of Lake Victoria in Kenya. The fungus is capable of blocking malaria transmission from mosquitoes to people.

Malaria prevention and control organisations are optimistic the findings could offer a lasting solution to malaria, a disease that infects about 220 million people a year.

The vast majority of malaria cases occur in Africa and India and are caused by the P. falciparum parasite carried by female Anopheles mosquitoes.

Focusing on P. falciparum, researchers from icipe, the International Centre of Insect Physiology and Ecology, and the University of Glasgow, reported in a study published this week (4 May) that mosquitoes with the fungus do not carry malaria parasites, either in nature or after experimental infection in the lab.

The fungus Microsporidia MB is naturally found at low levels in malaria mosquitoes in Kenya, but the researchers believe there may be ways to increase the number of mosquitoes carrying it, thereby blocking their capacity to transmit malaria. Only female mosquitoes bite people.

Further research will investigate precisely how Microsporidia MB could be used to control malaria in large mosquito populations, but the researchers argue it is scalable and could be delivered to remote areas via plane airdrops of lab-infected mosquitoes or spores.

The microbe is passed from female Anopheles arabiensis mosquitoes to their offspring at high rates and does not kill or cause obvious harm to the mosquito host, or affect its fitness.

It means using the fungus to tackle malaria would leave mosquito populations intact, in contrast to techniques such as genome editing which could wipe them out.

“Maybe the first step is to look at what’s naturally out there and see if that can work,” lead author Jeremy Herren, from icipe and formerly the University of Glasgow, tells SciDev.Net.

Herren says his background studying fruit fly and insect symbionts — organisms which live together — led to the study.

“I always thought the concept of symbiosis could be really powerful for controlling diseases,” he said. “I came into vector-borne disease research from that angle.”

The non-profit Malaria Consortium is “excited” about the Microsporidia MB discovery, but says that further studies will be required to confirm the findings with larger samples of mosquitoes and in other important mosquito species.

Timothy Wells, chief scientific officer at Medicines for Malaria Venture, says anything that is suggested to have an impact on malaria transmission “is good news”.

“This discovery is extremely interesting, and it will be fascinating to see how the technology can be developed to have impact on clinical malaria,” he says.

Malaria Consortium global technical director James Tibenderana says any potential use of the findings for malaria control will require larger-scale field studies to demonstrate efficacy and cost-effectiveness and to understand operational challenges.

“Acceptance of the approach amongst national governments and communities will have to be assessed,” Tibenderana says.

Herren agreed that demonstrating efficacy and engaging with policymakers is key for public health interventions.

He says community acceptance is crucial before any environmental releases can be considered.

“We’ve done a lot of work with the communities, they’ve actually been a key part of this research,” Herren says.

“They might be the first to benefit if it does work, we need to ensure that they understand what we’re doing and of course it will be up to them if they want this intervention or not.”

However, ecologists remain wary of the potential environmental and public health consequences.

Biologist Tom Wakeford from ETC Group, a conservation and technology non-profit, is urging caution about the discovery.

“[Microsporidia MB] is a naturally occurring biological organism … but whenever you release something as a biological control agent you don’t know what’s going to happen. We don’t know ecologically what it might do to pollinators or other organisms that are key parts of ecosystems.”

Yet Herren says his research indicates Microsporidia MB does not have the capacity to infect other organisms. “Probably there is a risk in anything, but I think in this case it would be very small, if you’re taking something that is already there and you’re increasing the prevalence,” he says.