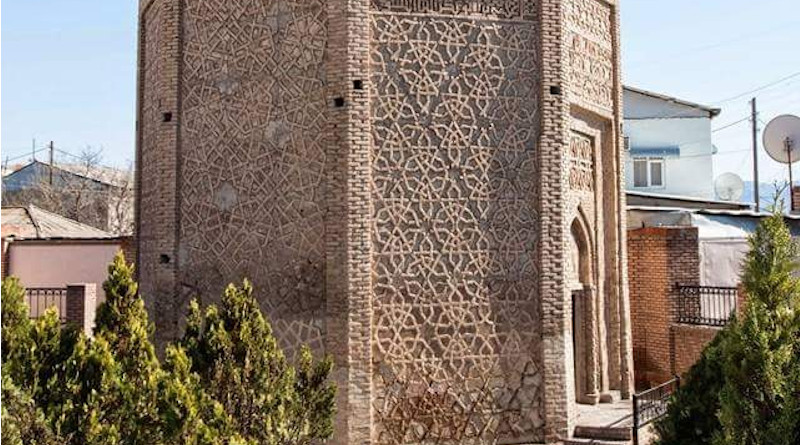 Detail of the tomb of Usif Kuseyir oglu in Nakhchivan

In September 2014, together with the Hon. Walter Schwimmer, former Secretary General of the Council of Europe and a distinguished Austrian Diplomat, I visited the Autonomous Republic of Nakhchivan, Azerbaijan. During our stay in the Nakhchivan city we had the opportunity to observe the tomb of Usif Kuseyir oglu – a rare architectural monument at the heart of Eurasia – and the Garabaghlar Tomb, a tremendous monument that takes visitors back in time.

The tomb of Usif Kuseyir oglu is an architectural monument in the city of Nakhchivan. This monument is in the avenue of Khiyabani and it is named by the people as the tomb of Atababa or the dome of Atababa. This architecture masterpiece dates back more than eight centuries ago and was restored at the beginning of the XX century. As a result of these restoration works the damaged sections of the tomb were repaired and the engineering devices were strengthened. This rare monument consists of the underground vault and aboveground tower-shape structure. The aboveground part of the monument in plan is octagonal inside and outside. The thickness of its walls is 80 cm and it was built with baked bricks in the size of 20x20x4,5 cm.

The prism shape body of the octagonal tomb is covered with a pyramidal shape on the outside, the inside shape and view is a spherical dome of the joined arch ceiling. We had the rare privilege to appreciate the most splendid structure of the double dome that is the only example intently reaching our time.  It is the result of a higher engineering accomplishment that enables the tomb of Usif Kuseyir oglu to be the only monument among the tower shape tombs of Azerbaijan in which the pyramidal cover has reached our time although it was built at the end of XII Century (over 800 years ago).  The inscription on the walls of the tomb says that “This tomb belongs to Usif Kuseyir oglu, Khaja, glorious chief, wise man of religion, the blessed man of Islam, the leader of the sheykhs”. This inscription shows that the tomb was built in 557 by Hijri calendar, in the month of Shavval (converted into Christianity: 1162). In the inscription at the main facade on the left side, the name of the engineer of the tomb is written: “It is the work of Ajami Abubakr oglu Nakhchivani, a builder”. The above part of the tomb surface was separated in the belt form and the inscription was carved there.  The Koran lines of the Cufic lettering were written on this belt.

The Hon. Mr. Vasif Talibov, the Chairman of Nakhchivan Autonomous Republic Supreme Assembly (Azerbaijan), has paid a special attention to the preservation of these scriptures on the walls of this majestic monument and his administration has invested many resources to maintain this very special architectural masterpiece.

The underground of the tomb consists of the vault and in the aboveground rises the memorial tower. The projected suspended points of octagonal tower are arranged with the simple lying bricks. The space among these devices constitute the cage of the building (the tomb surfaces) that are faced with geometric ornamental frying-pans and different surfaces are worked with the design of the individual motives. The ornaments are arranged in small bricks and placed on the surfaces in a frying-pan form mixed with a clay solution. The surface of the tomb opening to the West was arranged in the entrance head-arch form and differs from the other sides.  The ornamental designs keep a harmony with the architectural form of the construction. The dome between the vault and aboveground part is also a joined arch. In order to defend from the damp, humidity a special ventilation space of cylindric form was placed in the middle of the vault. The stairs in the West direction lead to the vault. The entrance portal in the main facade is in the form of a projected arch recess and the door is in the right-angle span form. Both, the main construction, and the decoration laying of Usif Kuseyir oglu Tomb were built of one material, highly qualified, perfectly shaped bricks, embodying perfectness, simplicity, clearness and pure geometric shape and even gives it a united, expressive reddish colorist flavor. Nakhchivan is a treasure of the world culture and represents architectural features that ought to be studied and constantly be promoted worldwide.  Mr. Vasif Talibov, the Chairman of Nakhchivan Autonomous Republic Supreme Assembly (Azerbaijan), under his leadership are invested many resources towards the restoration and engineering maintenance of this great masterpiece. Dear old Nakhchivan (Azerbaijan) is truly a gem that deserves more international attention.