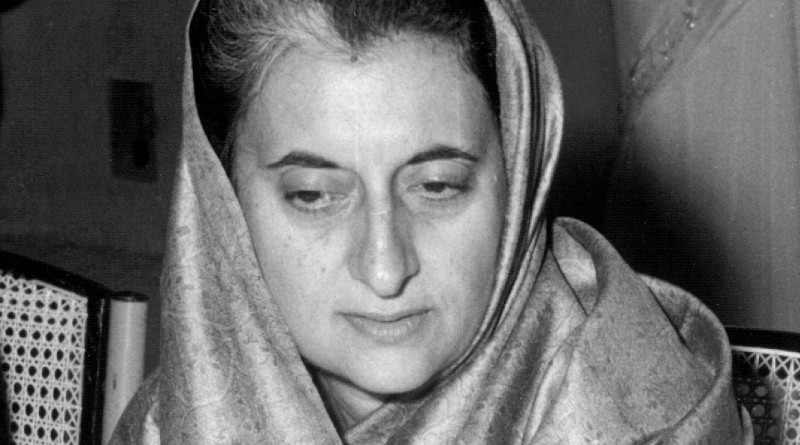 Indira Gandhi ‘s rise on power echelons as India ‘s leader changed India’s political dream and politics. Indira Gandhi ruled India as Prime Minister from 1966 to 1977 for three consecutive terms and from 1980 until her assassination in 1984 for a fourth term.

Under Indira Gandhi, India opted for a simple set of foreign and security policy guidelines to minimize threats and protect the region’s political interests which became the basis of Indira Gandhi doctrine. These principles were designed to increase Indian military might in the region and to assert its primacy in the global structure. Indira Gandhi government used iron hands to resolve security issues for India at national and regional level with the use of aggressive military might. Intensity of international communication became guideline for conducting foreign policy diplomacy.

In 1971, India entered into a strategic partnership arrangement with Russia by signing a friendship treaty as a mechanism for meeting its security needs. India procured Russian M-35 MBT (Main Battle Tanks) and restructured the Indian army into three major large strike corps to develop rapid ground attack capabilities and shock factors as ingredients of its conventional military strategy. India has embarked on an ambitious plan to modernize air force to develop robust air-fire capacity. Fighter aircraft of Russian origin were procured, including Mig-aircrafts, though imports from France and Britain remained a major source of developing India ‘s aircraft ability.

Throughout this time, the modernisation of the Indian navy also gained momentum. Another big field of strategic interest to India has been the Indian Ocean zone. India grasped security challenges from the involvement of external powers in this area and sought to strengthen its hold on the Indian Ocean world. The development of Naval Power capabilities to deter threats, security interests and demonstrate India’s military strength in the Indian Ocean area was conceived as necessary and fulfilled by inducing Indian Navy’s first aircraft carrier in 1968.

India ‘s security apprehensions deteriorated further during the 1970s following the arrival in the Indian Ocean of the U.S. Naval fleet. India at the time expressed detest at the involvement of the U.S. in the Indian Ocean region because of its conviction of supremacy in that region. This control of the Indian Ocean was considered essential for political stability and economic interests. India continued naval modernization through the induction of submarines and naval warships to increase Indian Navy’s strategic capability.

This strategy still guides India’s blue water navy aspirations but now India is conceiving the US as its Indian Ocean partner due to common Chinese threat.  On the strategic front of modernization, India went nuclear in 1974 under Indira Gandhi to demonstrate the country’s national strength by achieving strategic parity toward China to turn its actions towards Tibet’s territorial disputes. Nuclear arms have been considered the world power ‘s official currency. India opted for the strategic option of obtaining nuclear weapons as the most appropriate solution to achieving formidable military power by detonating nuclear bomb in 1974 using the cod code name Smiling Budha. With this “Nuclear coding (Smiling Budha)”, te relations of Indira and the USA transform again towards sour relationship.

When Indira came to power in 1966, on invitation from the US President Lyndon B. Johnson, Gandhi visited the US on 28 March 1966. During her visit, the Indo-US Education Foundation was formulated, but could not materialize due to strong opposition in India. America had suspended aid to India in 1965 at the time of the Indo-Pak war. However, the visit helped India secure more food and development aid from the US.

Johnson promised three million tons of food and nine million in aid. Indira resented the US policy of food aid as a tool in forcing India to adopt policies favored by the US. She also resolutely refused to sign the NPT (Treaty on the Non-Proliferation of Nuclear Weapons). Relations with US strained badly under President Richard Nixon when India signed the treaty of peace, Friendship and Co-operation with Russia in 1971. Nixon favoring of Pakistan during the Bangladesh liberation war vehemently criticized India for interfering with the internal affairs of Pakistan.

Despised Indira politically and personally, Nixon ordered complete stoppage of economic assistance and supply of defense equipment to India. Gandhi remained resolute in her support to Bangladesh, despite US attempts to force India to commit to a ceasefire. Opposition leaders, including Atal Bihari Vajpayee in the Lok Sabha and S.N. Mishra in the Rajya Sabha, condemned then US president Richard Nixon’s “anti-India statements” in Parliament. Other Jan Sangh leaders including L.K. Advani, Balraj Madhok and Kidar Nath Sahani led demonstrations outside the US Embassy.

The Pokhran Test had driven a wedge in the Indo-US relations. United states reacted negatively, especially in light of then ongoing negotiations on the Nuclear Non-Proliferation Treaty and the economic aid the US had provided to India. This issue caused a stalemate in the relations between the two countries. However, the United States concluded that the test did not violate any agreement and proceeded with a June 1974 shipment of enriched uranium for the Tarapur reactor.

The visit of Henry Kissinger, the secretary of the state of the US, to India in October 1974, helped to bridge the gap between the two countries, Gandhi’s imposition of emergency in 1975 strained the Indo-US relation. Indira met then US President President Ronald Reagan in 1981 for the first time at the North–South Summit held to discuss global poverty.

Gandhi’s 1982 visit, at then US President Ronald Reagan’s invitation, turned out to be markedly successful, with agreeing on cooperation in science and technology and signing an agreement on the Tarapur nuclear plant and to mark 1985 as the ‘year of India’ in the US.

Along with the USA, the Indira ties with the USSR are also the part of the club while explaining Indira days. The relationship between India and the Soviet Union deepened during Gandhi’s rule. The main reason was the perceived bias of United States and China, the rivals of USSR, towards Pakistan. The support of the Soviets with arms supplies and casting of veto at United Nations helped in winning and consolidating the victory over Pakistan in the 1971 Bangladesh liberation war. Prior to the war Indira signed a treaty of friendship with the Soviets.

In the beginning, India was not willing for Indo-Soviet treaty. But circumstances forced India to have a treaty with the Soviet Union in 1971. The circumstances were Pakistan-China-USA axis was formed by 1971, mainly against the USSR to curb its influence in South Asia and secondarily against India. The refuges from East Pakistan flooded India. So, the responsibility fell on India to protect East Pakistan against the West Pakistan.

At this juncture, China and USA came to support Pakistan and at his situation India was forced to have a treaty with the Soviet Union. Had India not concluded a treaty with USSR, its prestige would have been at stake. The Soviets were not happy with the 1974 nuclear test conducted by India but did not support further action because of the ensuing Cold War with the United States.

Indira was not happy with the Soviet invasion of Afghanistan but once again calculations involving relations with Pakistan and China kept from criticizing the Soviet Union harshly. The Soviets became the main arms supplier during the Indira years by offering cheap credit and transactions in rupees rather than in dollars. The easy trade deals also applied to non-military goods. Under Indira by the early 1980s the Soviets became the largest trading partner of India. India has expressed its strong opposition to the 1968 Non-Proliferation Treaty (NPT), which restricts the production of nuclear weapons to five permanent UNSC members. India claimed this nuclear weapons test as a response to China’s nuclear test but it threatened South Asia ‘s stability and instigated the region’s nuclear arms race. India is the main party to South Asia’s ‘original sin’ of developing nuclear weapons.

India ‘s regional strategy under Indira Gandhi had been focused on a more rational and militaristic neighborhood orientation. Indira Gandhi has opted for bellicose domestic security and foreign policy when negotiating with national states. By forcibly annexing Sikkim State in 1975, India asserted its military might and expansionist ambitions in the region.

Indira Gandhi enforced an emergency in the country from 1975 to 1977 after Aalabad High Court rejected Indira ‘s accession to power as an unconstitutional PM due to breach of election laws. This emergency won her administration bad name and she lost elections in 1977 but returned dramatically to power in 1980. Indira’s government considered it legitimate to use force to settle domestic issues, especially separatist tendencies in Kashmir, Punjab and Northern states.

The involvement of Indian armed forces in Jammu and Kashmir increased during the 1980s, while using repressive laws to curb the Kashmir independence movement that fuelled frustration in Kashmir and forced them to turn their peaceful movement into armed struggle. In 1984, the Indian army carried out Blue Star operation and invaded the Golden Temple to vacate the vicinity from the occupied armed Sikh insurgents that generated country-wide resentment and rage in the Sikh community because they considered it to be a breach of their sacred place and humiliation.

This very incident later became the trigger for her death as she was gunned down in the same year by her own Sikh guards. This led to the trend of “two and a half front” as India’s main threat matrix to defense. Third, the ideology of political elite especially Nehru and Indira Ghani as India’s prime ministers played a crucial role in India’s strategic choices to modernize its armed forces and develop powerful military capabilities to counter those threats. Both these three factors contributed to India’s more expansionist and interventionist global security and foreign policy as contrasted with Indira Gandhi. During the Indira period, military modernisation remained a central security strategy that still drives India’s foreign policy outlines. The major effect of this policy is arms race, militarization, and increased military spending in South Asian states to maintain power balance in the region that is inherently disruptive.