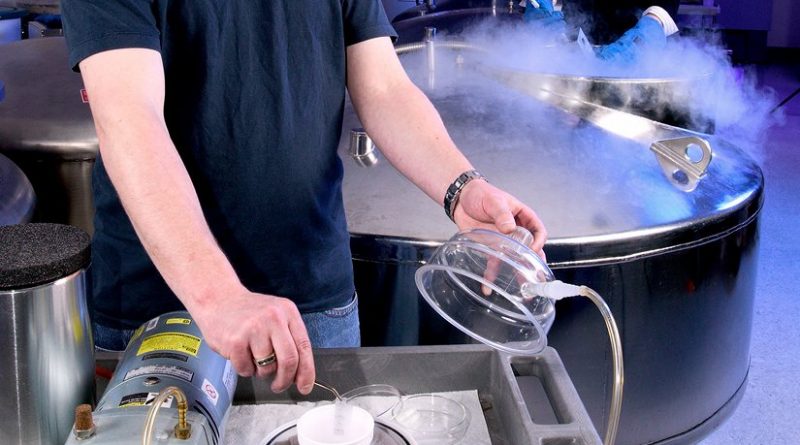 Following the granting of a young British girl’s instructions to be cryogenically preserved so she can be revived in the future when a cure for cancer exists, there has been intense debate inside and outside the scientific community on both the viability of cryogenic freezing but also on the ethical issues thrown up by the procedure. Once again, it raises the centuries-old question that defines the conflict between modern science and ethics: Even if we could do something, should we?

The young teenager, who cannot be named for legal reasons, was granted her request by the British High Court on October 6, just 11 days before she died of cancer. Her remains have already been transferred to a specialist facility in the United States for the start of the preservation process. Even though the ruling happened at the beginning of October, strict media restrictions were placed on the reporting of the case until the girl died, so as to guarantee her privacy.

The concept of cryopreservation (freezing organic matter in a state of suspension in order to revive them at a later date, possibly decades or even centuries later), whilst a popular and enduring theme in science-fiction, is regarded with deep scepticism by many in the medical community. Cryonics was first proposed in the 1960s by Robert Ettinger, a Michigan professor, in a book called ‘The Prospect of Immortality’, which argued that death could be a reversible process. Ettinger, who died in 2011, founded the Cryonics Institute in Michigan, and he, his mother and first and second wives all now reside in flasks kept at -196°C.

The concept has never gained mainstream support among the public but the number of people choosing to sign-up is steadily increasing each year. There are now nearly 300 cryogenically frozen people in the US, another 50 in Russia, and a few thousand perspective candidates.

Science behind the story

But is the process actually possible? Barry Fuller, a specialist in low-temperature medicine at University College London (UCL), commented that the technology of preserving cells at ultra-low temperatures is promising but cannot yet be applied to large structure like a human kidney.

“At the moment, we have no objective evidence that a whole human body can survive cryopreservation with cells which will function after re-arming,” he commented, referring to the process of re-activating cells in the future. He said that there is ongoing research with the immediate hope that scientists can use the technology to preserve human organs for transplantation.

Similarly, clinical advances in storing sperm and egg cells bear little relation to the technical challenge of trying to freeze and then reanimate the entire human circulatory system and, most importantly, the brain without causing any permanent damage.

Clive Coen, a professor of neuroscience at Kings College London (KCL) argued that this is where the practical science of cryogenics falls apart, even if the theory itself is sound. “The main problem is that [the brain] is a massively dense piece of tissue. The idea that you can infiltrate it with some kind of anti-freeze and it will protect the tissue is ridiculous.”

This leads to the very real ethical dilemmas surrounding the controversial process – are the advocates of cryogenic freezing selling false hope to very ill patients when the technology is currently unable to successfully freeze and then reanimate a single human organ, let alone an entire human body? Even if the technology did advance enough in the future to make the procedure successful, is it right to place future generations under such obligation if revived people become a nuisance or a burden? And, from a theological perspective, even if a body can be physically revived, would the reanimated individual still retain their soul or would they have a new one, or possibly, even return in a soulless state?

Cryogenics UK, the NGO that helped prepare the girl’s body for transport to the US, said in a statement: “We expect that future regulation will help hospitals to know where they stand legally and procedurally. The opportunity to utilize professional medical assistance may increase as we become a recognized and better regulated field.”

Professor Nils Hoppe, an expert in the field of life sciences law and an ethicist summarized the possible future dilemmas with regards to a technology that may now still exist mostly in the realm of science-fiction but may just become viable in the future: “As long as it never works then we don’t have to talk about regulation, but in 10 years time if it has progressed to the stage where it might be possible then there are serious ethical, legal and societal questions to answer,” he said. “If death is reversible then the body is no longer an item of property to be disposed of, [the deceased person] suddenly becomes an agent again.”

Source: Cordis, based on media reports