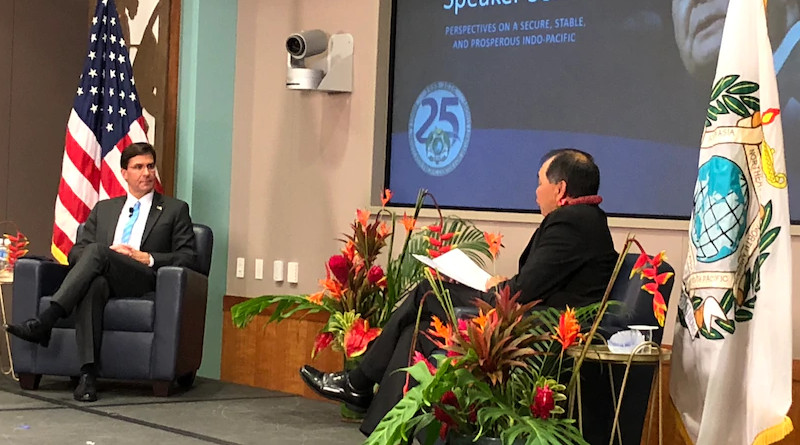 The international, rules-based system that has brought security and stability to much of the globe is under duress, Defense Secretary Dr. Mark T. Esper said in Honolulu on Thursday.

Esper said China is threatening the basis for prosperity in the Indo-Pacific region, and like-minded nations must band together.

Allies and partners are crucial in this new era of great power competition, Esper said at a ceremony marking the 25th anniversary of the Daniel K. Inouye Asia Pacific Center for Security Studies. The United States recognizes the dangers and is reaching out to nations around the globe to counter China’s moves.

That U.S. network of allies and partners ”remains the enduring asymmetric advantage we have over near-peer rivals, namely China, that attempt to undermine and subvert the rules-based order to advance their own interests – often at the expense of others,” he said.

Great power competition is the foremost threat facing the globe, and the United States has made it the foundation of the National Defense Strategy promulgated in 2018.

”One of the goals that drives our implementation of the [strategy] is to focus the department on China,” he said.

The Defense Department has taken a number of steps including the creation of a new policy office to counter China. There is now a China strategy management office to integrate DOD efforts to deter China.

The National Defense University has shifted its curriculum with 50% of the coursework concerning China. He also decreed that the services make China ”the pacing threat” in all DOD schools, programs and training.

”These efforts are critical to preparing our military’s future leaders for tomorrow’s challenges,” he said.

The Chinese Communist Party – not the people – rule China, and the leaders in Beijing have repeatedly fallen short of their promises, and China does not abide by international laws, rules or norms, Esper said. This is despite continuing to reap the benefits of the international system and free markets.

The Communist Party also reneges on commitments it made, including promises to safeguard the autonomy of Hong Kong and not to militarize features in the South China Sea, the secretary said.

”Beijing’s self-serving behavior … is not isolated to just the Indo-Pacific region,” he said. ”Increasingly, our like-minded partners around the world are experiencing the CCP’s systematic rule-breaking behavior, debt-backed economic coercion and other malign activities meant to undermine the free and open order that has benefitted nations of all sizes – China included.”

Fishing fleets with no care for the ecological and economic damage they create around the world are an example of China flexing its muscles. Beijing has failed to uphold its obligations under the World Trade Organization. Chinese leaders also hampered global efforts to control the coronavirus pandemic due to its lack of transparency with the World Health Organization, Esper said.

There are direct military implications to the Chinese attitude.

”To advance the [Chinese Communist Party’s] agenda, the People’s Liberation Army continues to pursue an aggressive modernization plan to achieve a world-class military by the middle of the century,” the secretary said. ”This will undoubtedly embolden the PLA’s provocative behavior in the South and East China Seas, and anywhere else the Chinese government has deemed critical to its interests.”

The PLA does not serve the people or swear an oath to a constitution but is the military arm of the Communist Party. It is in league with attempts to undermine rules and norms across the globe, including Djibouti, Sri Lanka, Latin America and Africa.

”Clearly, China seeks to undermine the free and open order itself, which impacts every nation supporting and benefitting from this system,” he said.

DOD’s answer to this is preparedness, strengthening alliances and partnerships, and promoting and expanding a network of like-minded partners.

The United States is focusing on modernizing the force to deter, compete, and, if necessary, fight and win, across all domains: air, land, sea, space, and cyberspace, Esper said.

”Thanks to our largest research and development budget in the department’s history, we are prioritizing the development and deployment of game-changing technologies, such as hypersonic weapons, 5G and artificial intelligence,” he said. ”We are also investing in platforms critical to the future of a free and open Indo-Pacific, such as submarines, B-21 stealth bombers, P-8 maritime patrol aircraft, unmanned underwater and surface vehicles, long-range precision munitions, integrated air and missile defense, and a new class of frigates.”

But it is not just equipment. DOD is developing a new Joint Warfighting Concept for the 21st century. Part of that is making the U.S. military more strategically predictable to our partners, and operationally unpredictable to our competitors, Esper said.

”These efforts prepare our military for future conflicts that we hope we won’t need to fight, but must – and will – be prepared to win,” he said.

Allies and partners are key in this struggle. DOD must assist countries across the region to develop their national security policies, strategies, plans, and laws.

”This type of work — with nations such as Bangladesh, Mongolia, the Philippines and several Pacific Island nations — has helped put like-minded partners on a path toward greater preparedness, enabling them to become more confident in their sovereignty,” he said.

Allies and partners provide an asymmetric advantage adversaries do not have.

”Our shared security concerns and desire to maintain a free and open Indo-Pacific have yielded countless bilateral and multilateral initiatives throughout the region aimed at strengthening and expanding defense cooperation and alignment,” Esper said.

Part of this process is through an improved and expanded foreign military sales program.

”By streamlining the FMS process, we have lowered costs and accelerated our response time to partner nation requests, allowing us to deliver critical capabilities more quickly and effectively,” he said.

The United States is working with long-established allies, including Australia and Singapore, and with other nations in South Asia, Southeast Asia and Oceania.

Bilateral alliances are good, but multilateral efforts are better. Promoting a more networked region encourages the growth of inter-connected security partnerships, Esper said. This is a force multiplier for nations that share U.S. interests.

”As we continue to implement our Indo-Pacific strategy, the United States needs our allies and partners to contribute in ways that are fair and equitable,” the secretary said. ”We need them to pursue close alignment in policies that uphold a free and open order, and reject decisions that would benefit malign actors to our collective detriment. And, we need them to make the necessary investments to improve their capabilities so that, together, we can safeguard our interests, strengthen our readiness, and defend our sovereignty and values.”