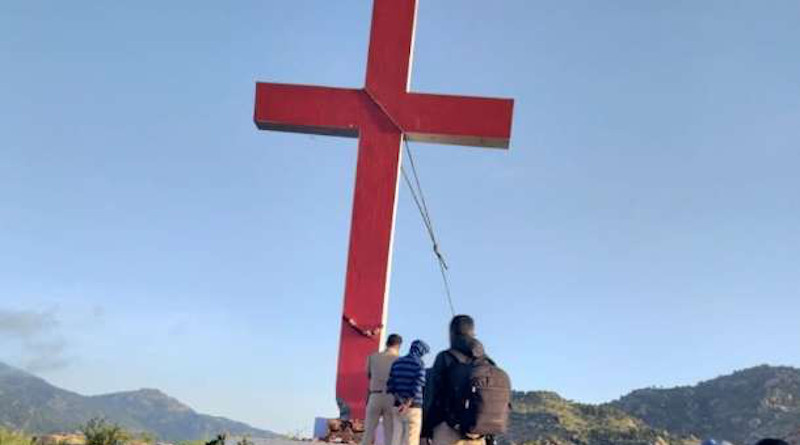 Police remove a cross from a hill near a Catholic parish in Karnataka state on Sept. 23 after accusing Christians of erecting it without permission on government land. (Photo supplied)

Police in India’s Karnataka state have removed 15 crosses from a hill near a Catholic parish, accusing Christians of encroaching on government land and erecting crosses without permission.

It was the second such incident this year in the southern Indian state.

More than 300 police and revenue officials arrived Sept. 23 at St. Joseph’s Church in Susai Palya in Chikkaballapura district and removed the crosses.

In a six-hour operation, police removed a 32-meter-long cross from the hilltop and 14 seven-meter-long crosses on the way to the hilltop.”The government officials acted arbitrarily without any prior notice,” said parish priest Father Antony Britto Rajan.

He said hundreds of parishioners gathered and watched the police action “in shock and horror.”

“We have been using the space for more than five decades for praying the Way of the Cross, especially during the Lenten season,” he told UCA News on Sept. 25.

Besides Catholics, people from other religions visit the hill for prayer. “There was no problem from anybody,” he said.

Police officials claimed they were following a state High Court order but refused to show any such order, the priest said.

The state government is run by the pro-Hindu Bharatiya Janata Party (BJP), which is accused of supporting Hindu groups who have pledged to make India a Hindu-only nation.

Church leaders said the BJP government in the state is deliberately targeting Christians as they are opposed to “our charitable works meant for social upliftment of the poor and the marginalized.”

In a similar operation in March, police removed a statue of Christ and 14 crosses from a Christian burial place on Mahima Betta hillock in the state’s Bengaluru district. There too police said Christians had encroached on government land.

Church officials said they legally owned the land and have documents to prove that the land was given to them.

Archbishop Peter Machado of Bangalore reacted to the March incident by saying the police removed the statue and the crosses “bowing to the pressure of a few outsiders.”

In March, he expressed hope that the state government “will instruct the local authorities to do this redressal act immediately” by reinstalling the crosses.

But after seven months, the government has done nothing to reinstall the statue or the crosses. On the contrary, it has removed 15 more crosses.